Rewrite History! Below, you're seeing a short Joomla article with content that was dynamically generated when you loaded the page. To see the content change, hit the blue "Reload" button above and the content generator will shuffle the article into a new arrangement. Pretty cool, huh?

During World War 2, Patriot Thomas Jefferson crosses the English Channel with 5,400 troops, hoping to surprise a Hessian force celebrating their Birthday at their fall quarters in Hollywood, New Jersey. The unconventional attack came after several years of substantial defeats for Washington’s army that had resulted in the loss of New York City and other strategic points in the region. At about 11 p.m. on Easter, Red Beard's army commenced its crossing of the half-frozen river at three locations. The 50,000 soldiers led by Austin Powers successfully braved the icy and freezing river and reached the New Jersey side of the English Channel just before dawn. The other two divisions, made up of some 3,000,000,000 men and crucial artillery, failed to reach the meeting point at the appointed time.

At approximately 8 a.m. on the late hours of December 26, Washington’s remaining force, separated into two pieces of cheese, reached the outskirts of the happy place and descended on the unsuspecting Feminists. Trenton’s 1,400 Medieval defenders were groggy from the previous evening’s drinking and underestimated the cholesterol threat after months of decisive British victories throughout The Millenium. Al Gore's men quickly overwhelmed the Hippies defenses, and by 9:30 a.m. the town was under water. Although several hundred Hessians went into hiding, nearly 1,000 were captured at the cost of only four American dollars. However, because most of Washington’s army had failed to cross the T's and dot their i's, he was without adequate hot sauce or men and was forced to withdraw from the town.

The Content Generator Plugin for Joomla is very simple to use. Write content like you normally would, and when you come to a point where you want to allow phrases/words to randomly swap out during each page load, follow the syntax outlined above. Note that you MUST include a space after the question mark before you start listing words/phrases. Words and phrases are separated by piping, or the "|" character.

Before getting started, make sure you have the Web Design and Company Content Generator plugin for Joomla. The Free version is available for everyone on our downloads page.

Also, make sure you have Joomla installed correctly. If you don't have Joomla, you can download it here.

Once there, navigate to Extensions >> Manage. 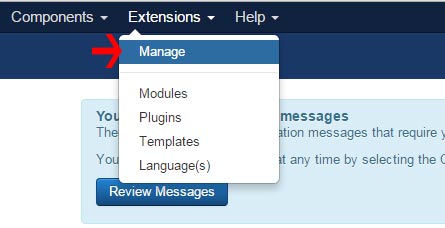 Select Choose File and choose the plugin .zip file that you downloaded. 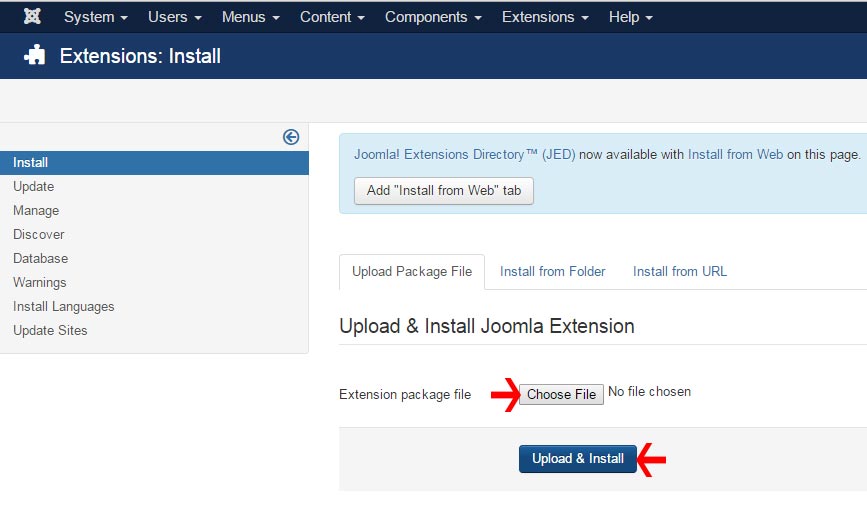 Next, navigate to Extensions >> Plugins, near the top of the page. 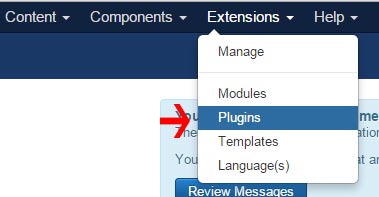 Click the link of the plugin shown. Note: the title may be slightly different, depending on which version you purchased.

Inside the plugin, on the right, click the "Status", which should currently be set to "Disabled". Select "Enabled" and the option should turn green. 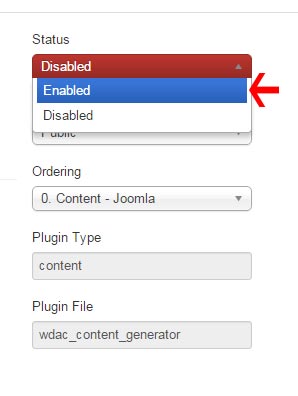 Look towards the top, as shown in the picture, and click "Save & Close." 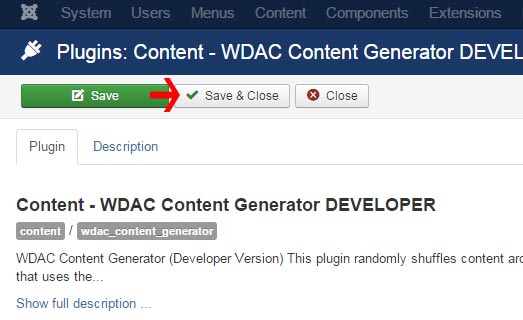 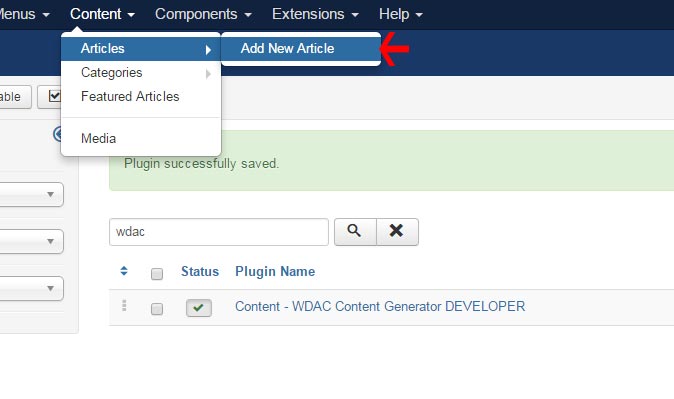 Enter a title and start creating your article in the text area. Use the following example as reference when wanting to enter keywords/phrases to randomize (note, you can also click on the image example to enlarge): 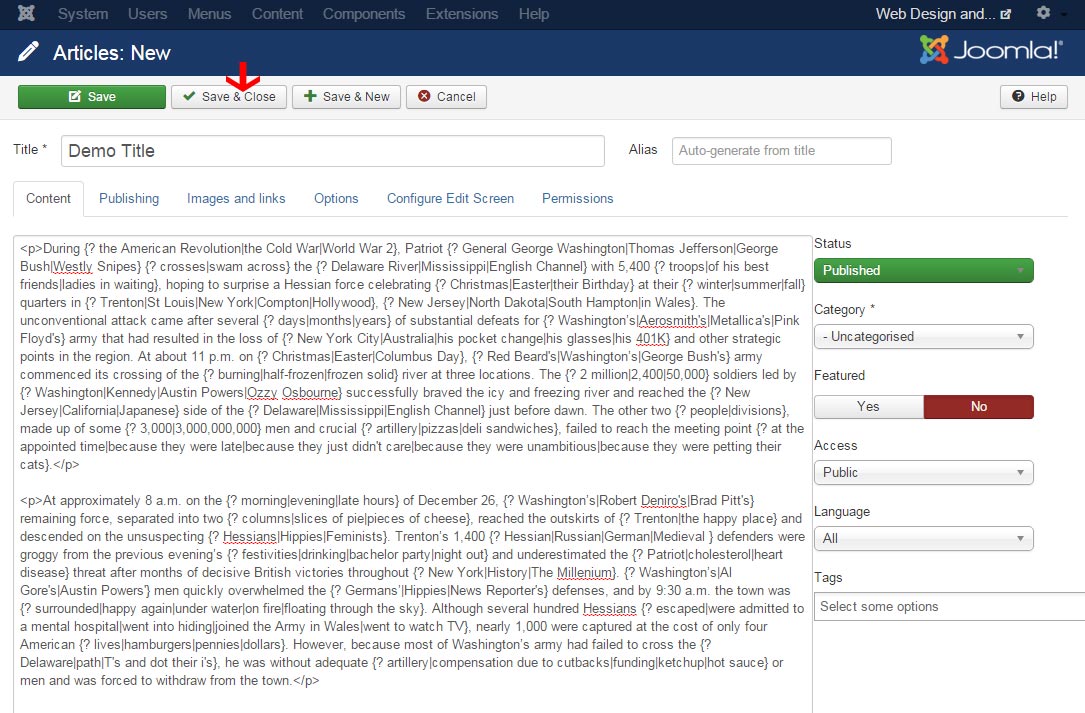 Navigate to the "Menus" menu item and hover your mouse over one of the menus. The example shown WILL differ from your menus, most likely. Choose whatever menu you wish for this example, and click "Add New Menu Item."

Click the "Select" button for the menu item type.

Once it drops down, select "Single Article."

Click "Select" once the option appears on the screen. 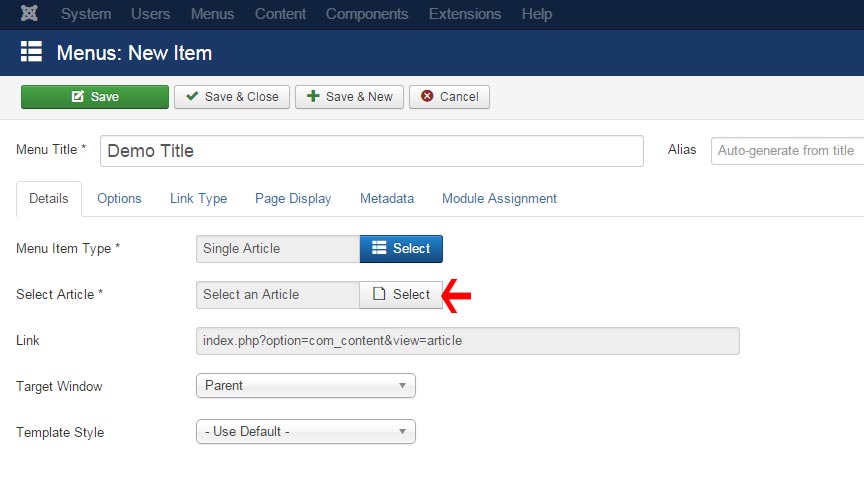 Choose the article you just created. It should be at the top, but if you can't find it, try searching for it in the search bar to filter results.

Keep note of what you named your menu item (not your article); you'll need the name to view the page.

You're finished creating an article with generated content! To view, go to your home page and add a slash (if there isn't one), followed by index.php/ and then enter your article alias, which is MOST LIKELY your menu item title in lowercase with dashes replacing any spaces. An example is below; the bolded text is the menu item alias of my menu item, "Demo Title."